Cooking is more fun with friends. Invite your friends to join Slurrp Community and share your special recipes with them
test
Navratri Begins, Savour These Vrat Dishes From India
Updated : September 25, 2022 10:09 IST
Share
The nine-day event is celebrated with a lot of fervour and delicious food
In India, Navratri is a remarkable festive season. The festivities begin with the auspicious nine days, Navratri (nine days). With a series of various joyous events, celebrations, pandal hoppings, garba nights and much more. You would be extremely mistaken to believe that Gujarat alone has the sole celebration of Navratri. The religious festival is observed in diverse ways and under many names throughout India, but the underlying theme is always the triumph of good over evil. Every event, whether it’s the opulent Durga Pujo in West Bengal, Dandiya raas in Gujarat, Raavan Dahan in Delhi, or the interesting Kolu ceremony in Tamil Nadu, has its own distinctive flavours that are enjoyed over these nine days of fasting. Here is a collection of the best traditional Navratri dishes, ranging from older savoury dishes to more modern treats savoured across India.
Also read: Good News: Navratri Thali To Be Served In Indian Railways
Sabudana Khichdi
One of the most well-liked types of starch is sabudana, which gives fasting followers the much-needed energy boost. In the majority of Northern India, soaked Sabudana is prepared by cooking it with mild spices, peanuts, and potatoes and seasoning it with black pepper. Since rock salt, also known as sendha namak, is unprocessed and regarded as pure, it is utilised in the preparation rather than conventional table salt. During Navratri, sabudana is a fairly common ingredient, and it is also used to make Sabudana Vada, which is a fantastic Navratri snack.
Luchi with Aloo’r Dum
Devotees turn to enjoy this delicious combination over the four main days of puja during the enormous Durga Pujo celebrations in Bengal, which begins with Mahalaya. Only maida is used to make Luchi, a dish similar to “Poori.” They are deep-fried and served with aloo’r dum, a delectable concoction of baby potatoes with portions of onions, ginger, and garlic, a blend of spices, and a garnish of herbs like basil, coriander, and parsley. In contrast to the stringent vegetarian diet followed by people in the north during the nine days of Navratri, non-vegetarian food is consumed in many forms in the east. 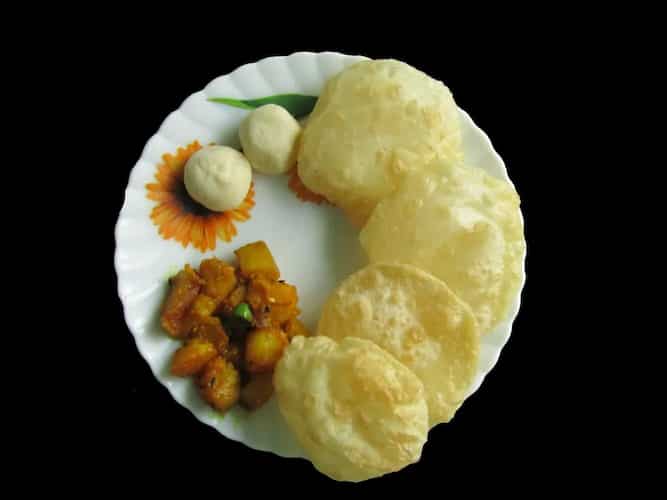 Payasam
Payasam, a popular sweet treat in Tamil Nadu, is an essential component of prasadam during Navratri. Vermicelli is used in this traditional payasam recipe, along with milk, sugar, and cardamom powder. Other variations make their major ingredients moong daal or fragrant rice. The highlight of Navratri down south is “Golu,” an arrangement of celebratory dolls and figurines on step-like constructions that tells a religious story. When people invite guests over to see their golu, they also provide sundal, fruits, and this delectable prasadam.
Sev Khamani
Sev khamni, a traditional Gujarati navratri dish, is produced by soaking chana dal for five to six hours, draining the water, and then cooking it for three whistles in a stove. Mustard seeds, ginger paste, green chilli paste, sugar, salt, and lemon juice are added to a pan of heated oil and cooked over a low temperature until the oil separates. Garnish with sev and pomegranate when ready.
Kuttu ke atte ki Kachori
People who observe the Navratri fast refrain from eating grains, legumes, and cereals throughout the majority of India’s northern states. The special fasting ingredient kuttu ka atta, produced from buckwheat, is frequently utilised to prepare healthful foods for devotees who fast over these nine days. It is lighter than conventional atta and is a non-cereal flour called kuttu. Either cottage cheese or potatoes cooked with mild spices are used to stuff the kachori, which is then deep-fried in oil. People enjoy it with yoghurt and a sprinkling of black pepper or chilies to enhance its flavour.
Falahari Arbi
One of the most popular veggies that may be enjoyed during the five days of Navratri is arbi, also called as “Taro Root” in English. Arbi is parboiled after being sliced into thin pieces and cleaned. Then it is cooked in a paste of tomato, ginger, green chilies, coriander, cumin, ginger that has been grated, paprika, and plenty of rock salt. A fantastic Navratri meal has a little herb garnish and is served with kuttu ki roti or singhare ki roti. For aficionados, it can be made healthier and more flavorful by adding additional spices.
Sundals
The signature dish of Navratri celebrations in Andhra Pradesh and Tamil Nadu is tempered legumes with grated coconut and mild spices. During all nine days of Navratri, many kinds of sundal—made of chickpeas, chana daal, moong daal, green gramme, cow peas, field beans, sweet corn, etc.—are prepared and served as prasadam. Additionally, preparation is not too difficult. The legumes are soaked the previous night and boiled just long enough to soften but not mush them. Then, salt, asafoetida, mustard seeds, curry leaves, red or green chilies, and chilli flakes are added.
©2022 Slurrp, HT Media Labs. All rights reserved.