City
By Luisana Ortiz
On Campus
By Jana Seal
On Campus
By Kaitlin Campbell
Coronavirus
By Kyle Chouinard
From the Hill
By Kate Kelley
From the Studio
By Rachel Raposas, Sophie Szydlik
From the Stage
By Sophie Szydlik
Events Tracker
By Rachel Raposas
Men’s Soccer
By Cole Bambini
Men’s Soccer
By Henry O’Brien
Women’s Soccer
By Wyatt Miller
Football
By Connor Smith
Personal Essay
By Ahmed AlQubaisi
Guest Column
By The Department of Women’s and Gender Study
Guest Column
By Malique Lewis
Guest Column
By Sofia Rodriguez
City
By Anshul Roy
Beyond the Hill
By Emily Steinberger
Beyond the Hill
By Max Mimaroglu
City
By Katie McClellan
Nina Gerzema | Asst. Photo Editor
Surya Vaidy – a student studying environment, sustainability and policy – believes people need to combat climate anxiety by taking action.
Get the latest Syracuse news delivered right to your inbox.
Subscribe to our newsletter here.
Content Warning: This story contains mentions of suicide, domestic abuse and drug abuse.
Sarah Pralle often finds herself thinking about the possibility of her young daughter choosing not to have children because of the detrimental effects of climate change.
“I think sometimes about the hot summer we’re having and I think: ‘that might be the coolest summer we’ll ever have’ … that’s a strange thought,” said Pralle, a professor of political science in Syracuse University’s Maxwell School of Citizenship and Public Affairs.
The negative psychological impacts of global climate change, such as anxiety and feelings of helplessness, are being felt by those studying the phenomenon at SU.
Aside from her concerns about the future generations, Pralle also said she occasionally stops consuming environmental news for a few days in order to take a “mental break” from a topic that she said can be overwhelming.

Dominic Wilkins, a doctoral student studying geography and the environment in Maxwell, also voiced climate change-related anxiety.
“It (can) send you down a spiral or … rabbit hole as you realize and learn about just one more way that some people somewhere have caused some sort of destruction,” he said.
Wilkins believes that looking at crises throughout history can provide insight into the impact of climate change.
“People have been struggling in conditions and dealing with catastrophes much worse than a lot of people will end up having to deal with, simply because of particular histories, power dynamics and geometries they’ve been living within,” Wilkins said.
Nearly 40% of 16-25 year-olds said that climate change has made them hesitant to have children, and over 75% of them feel that the future is frightening, according to a survey by The Lancet Planetary Health in Dec. 2021.
A Dec. 2021 report cited that a growing number of people, particularly in low-income and non-white communities, are suffering from adverse mental health symptoms due to the impacts of climate change.
Surya Vaidy, who studies environment, sustainability and policy in Maxwell, said progress is hindered by negativity.
“But there’s also this sense of helplessness like this is ingrained in society, this is the established mode of what’s being done,” he said.
Vaidy said taking action is the way to combat climate anxiety, even if that means simply becoming more informed or discussing climate change with peers. 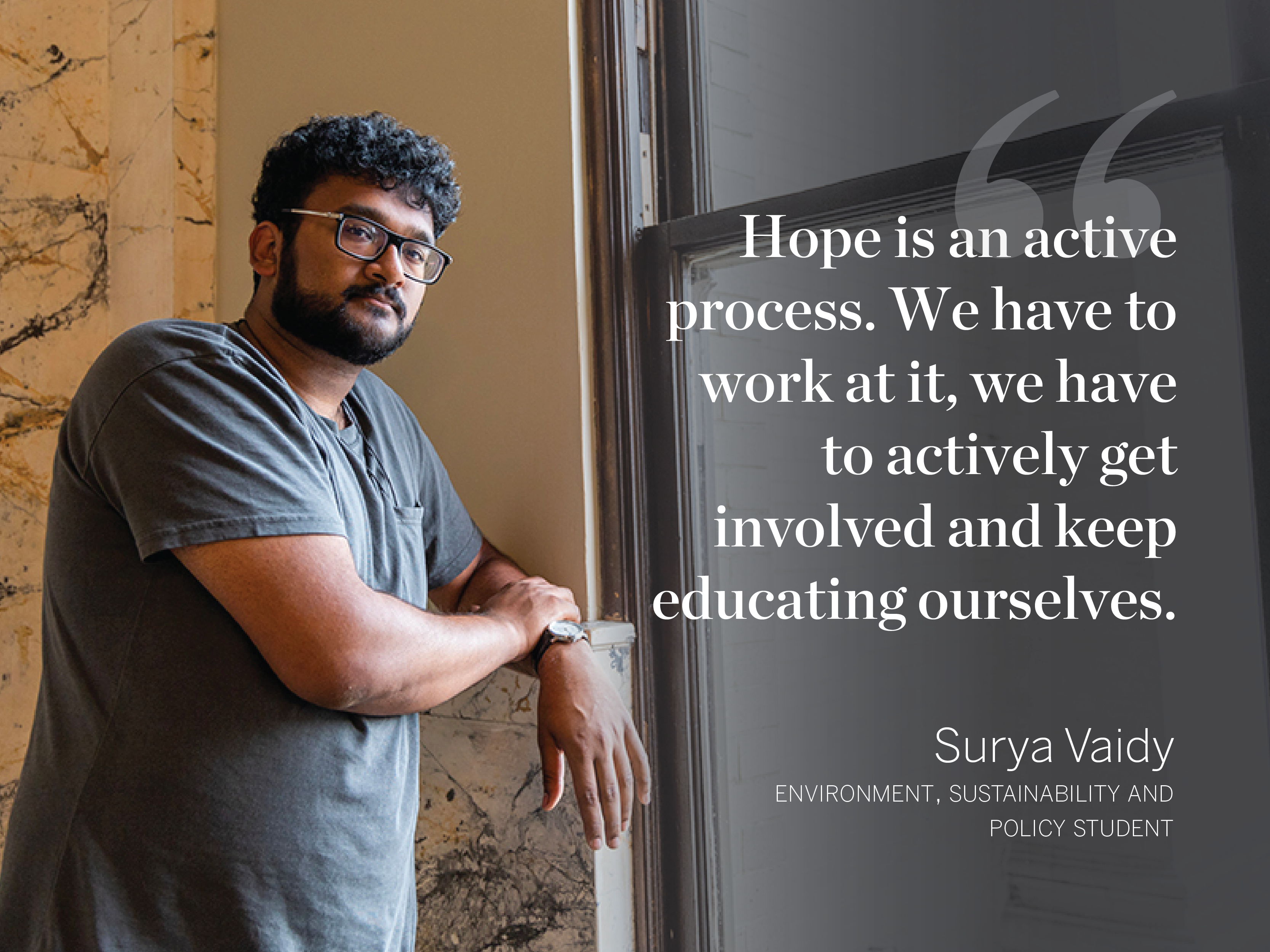 Stephanie Zaso | Design Editor
Chie Sakakibara, an associate professor in the geography and the environment department in Maxwell at SU, has researched the Inupiat Tribe of Alaska — a group of about 750 Indigenous people who have lived off the Alaskan tundra for millennia — for over 18 years. In the 1970s, the Inupiat people migrated inland to escape rising sea levels, she said.
Currently, the tribe is considering relocating again due to sea level rise and the diminishing population of wildlife around them, Sakakibara explained. Recently, she discovered higher rates of suicide, domestic abuse and drug abuse within the Inupiat community, but she still remains hopeful.
But the Inupiat tribe is making its voice heard, Sakakibara said. The tribe is sending delegates to international climate change summits, influencing policymakers in Alaska and collaborating with other indigenous tribes such as the Inuit Tribe in Canada to raise their visibility.
“I feel the … stress that people are going through right now,” she said. “But at the same time, this is an exciting time for the community to really start building a network with other indigenous communities of the world.”
Echoing similar sentiments, Vaidy recalled one of his previous professor’s advice on hope.
“Hope is an active process,” Vaidy said. “We have to work at it, we have to actively get involved and keep educating ourselves.”
Editor’s Note: Surya Vaidy is a photographer for The Daily Orange. He does not influence the editorial content of the News section in her capacity as a photographer.
Published on September 11, 2022 at 11:53 pm

Go Coconuts With 2 Recipes For A Wholesome Meal – TravelDine